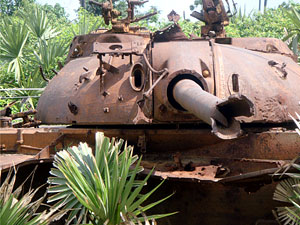 Bridging Lanka began as Diaspora Lanka in 2010 with two historical origins – the aftermath of the tsunami and the result of a business delegation to Australia.

Bridging Lanka began as Diaspora Lanka in 2010 with two historical origins – the aftermath of the tsunami and the result of a business delegation to Australia.

One was borne of the horrors of the 2004 Christmas tsunami which ravaged many parts of the island. Through our anchor person in Sri Lanka, Myrna Setunga, we were able to provide emergency supplies at the height of the disaster, temporary housing and livelihood support some months later and community development assistance for longer term recovery. These efforts were centred on the Ampara District.

The other was in response to the request for diaspora investment by visiting businessmen from regional Sri Lanka. The Business for Peace Alliance and International Alert with financial backing from AusAid, sought to impact peace through business and thus address a major contributing factor of the war, regional poverty. Both of these catalyst points occurred before any resolution to the decades-long conflict.

Following a successful business symposium, a group of Sri Lankan businessmen in Brisbane from Tamil, Muslim, Burgher and Sinhala backgrounds formed BrizPAct – Brisbane’s Business for Peace Alliance, to explore how they could assist the development of regional enterprises in Sri Lanka. In time a nationwide body was established, Diaspora Lanka Ltd, a not for profit company which was mandated to identify a constructive role for the diaspora in post-conflict Sri Lanka. In mid-2010, a fact finding mission to Sri Lanka identified priority projects and credible local partners to kick-start Diaspora Lanka’s work.

Today, Diaspora Lanka draws its membership from many Australian states and has a range of projects in Mannar District. Our networks in both Australia and Sri Lanka are expanding as we play a vital role in working toward reconciliation.

By mid 2014 which is 4 years after Diaspora Lanka was formed, its members opted for a name change – Bridging Lanka. This name will be registered in Sri Lanka and Australia.

In Mannar where most of our grounded work occurs, we have established the Mannarin Marumalarchi Trust (‘the renaissance of Mannar’). The Trustees will coordinate the action of six subcommittees – women and community development, eco-tourism, town planning, business development, education and environment – priority sectors that people nominated for development.