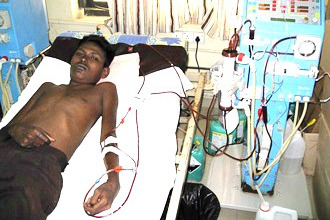 We have stumbled upon a disease with a death sentence – chronic kidney disease among farming families in northern Sri Lanka. Increased chemicals in agriculture are reacting with ‘heavy metal’ soils and poisoning the ground water. An urgent response is needed to save lives.

While researching traditional and current cultivation practices in Kunchukulam’s three villages, we stumbled upon an illness with a death sentence – chronic kidney disease. There is growing evidence that increasing use of chemicals in agriculture are reacting with the ‘heavy metal’ soils of the area and poisoning ground water supplies.

We personally know of Kunchukulam people who have died or are dying from chronic kidney disease of an unknown cause (CKDu) – and these are the people with whom we work closely. Once the disease is contracted a person has only two years of life left!

Sri Lanka is the leading country with the incidence of CKDu, affecting something like 23% of the population in the North Central Province. We suspect the same applies to the Northern Province including Kunchukulam in Mannar District where little research has been conducted. But anecdotally we know the numbers with CKDu are rising steeply.

Help us to save lives! We plan a number of responses:

Providing safe drinking water through a village level reverse osmosis water filtration system
Running a strong advertising campaign to influence farmers to adopt chemical-free agriculture
Conducting house to house research into the prevalence of chronic kidney disease
Testing children and young people for CKDu in order to get the disease in its early stages.

A starting fund of AU$ 6,000 is needed to kick start urgent measures to reduce the impact of CKDu’..

With your partnership together we can make a difference.